When in Budapest, you’d be missing out on a unique and quirky experience if you didn’t visit a ruin bar. They’re all the rage in this magnificent, free-spirited Eastern European city, and if you’ve never heard of a ruin bar then you’re in for a treat. 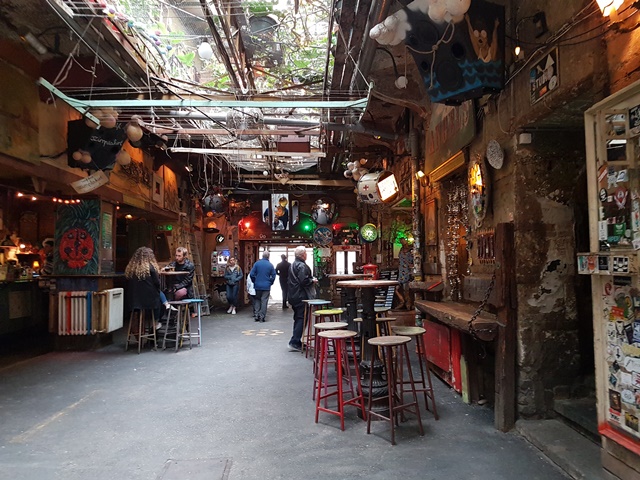 If you think the name implies a night of debaucherous goings-on, with the possibility of ending up in a hospital room having your stomach pumped, then you’d be wrong (unless this is your usual modus operandi of course…)

Ruin bars literally refer to the once dilapidated buildings they occupy.

During the early 2000s, there were many of these crumbling buildings in the heart of the Jewish quarter (District VII). Located in and around what used to be the Jewish ghetto, these buildings were abandoned in the decades following the end of World War II.

All it took was a few enterprising visionaries to recognise the value of bringing these buildings back to life. One of these innovators was Ábel Zsendovits who in 2002, took a gamble on creating a hip, artsy bar culture where you could come and chill, and simply be yourself.  The result was Szimpla Kert, considered the mecca of ruin bars. 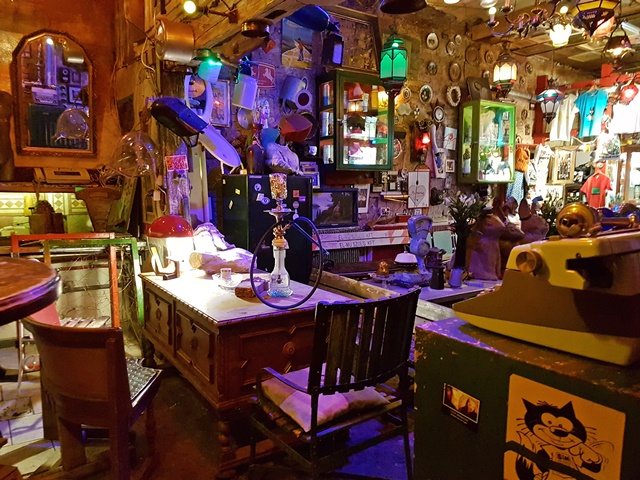 Szimpla Kert has an unpretentious façade and it’s almost hidden from the public. If you didn’t know where to go, you’d probably walk straight past because it resembles the entrance to an ordinary residence. But across the threshold, it’s as though you’ve entered the land of Oz!

There’s a bustling inside/outside courtyard, filled with a mish-mash of mismatching everything. Its funky décor represents everything from steam-punk, to Bauhaus, to art deco, to rubbish tip chic! Everything here is recycled, re-purposed or re-jigged to represent the ultimate in eccentric. 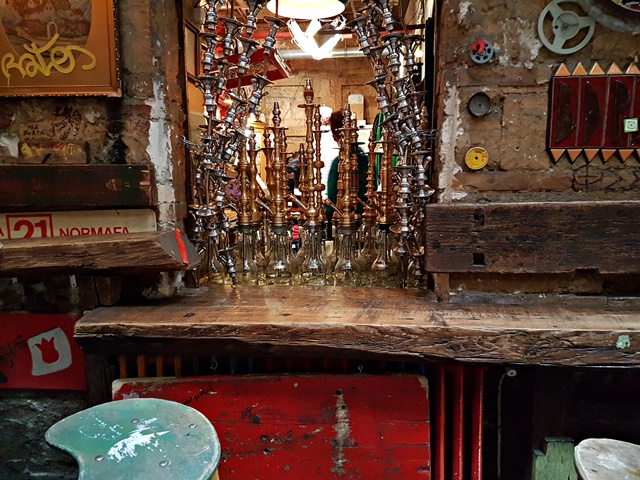 You’ll find a vintage typewriter and a bunch of bric-a-brac sitting on an old chest of drawers alongside a pile of shishas. You can sit and sip beers or cocktails in a labyrinth of little rooms where you’ll see a pommel-horse or an old ironing board used as a table. An ancient car has been chopped in half and converted into a table and seats, and plonked under a metal staircase. Chairs hang from the roof, rickety stools have been haphazardly placed everywhere. Wildly decorated mannequins are suspended from roofs and ceilings. 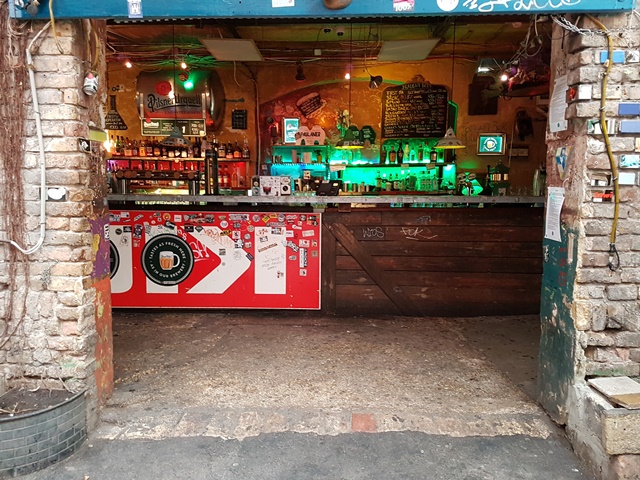 For those who like to bring out their inner vandal, you won’t be ejected by a burly bouncer for carving your initials on any surface you fancy, or scribbling your message to the world on a wall or window.

The atmosphere is exciting – almost electric, but also very laid back. If you want a night out with a group of people with a bustling, upbeat vibe, you won’t be disappointed as the setting alone will deliver the goods.

Even if quirky is not your scene, and you just want a place to relax and people-watch, then you’ll still find plenty of beer, wine and cocktails, live music and food, all great reasons to visit a bar anyway. 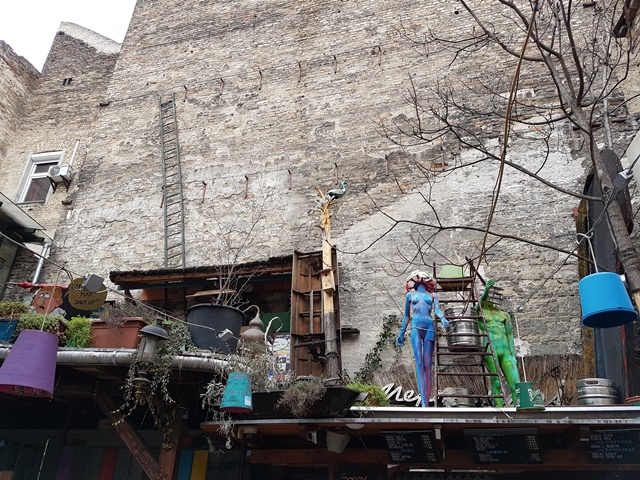 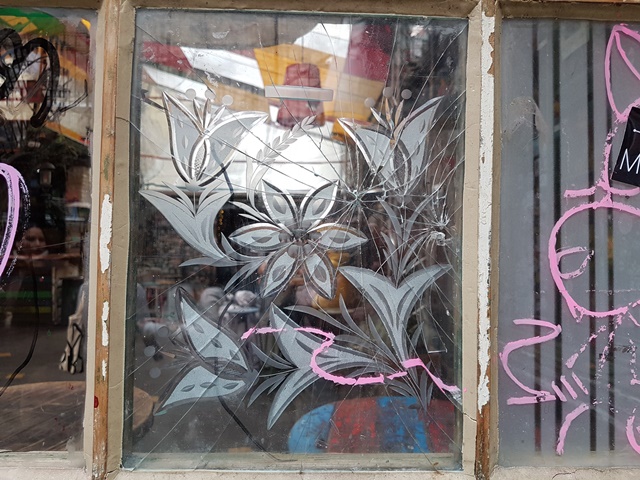 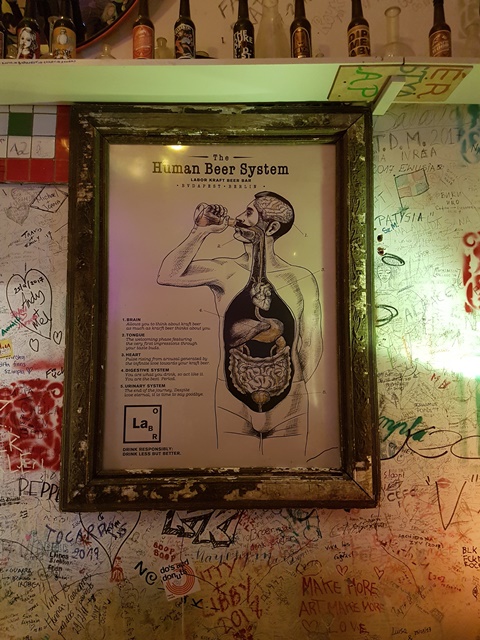 Find out more about the evolution of ruin bars 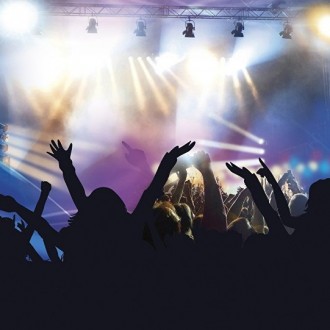 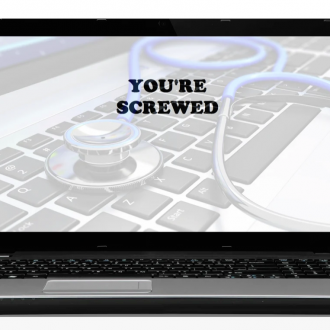